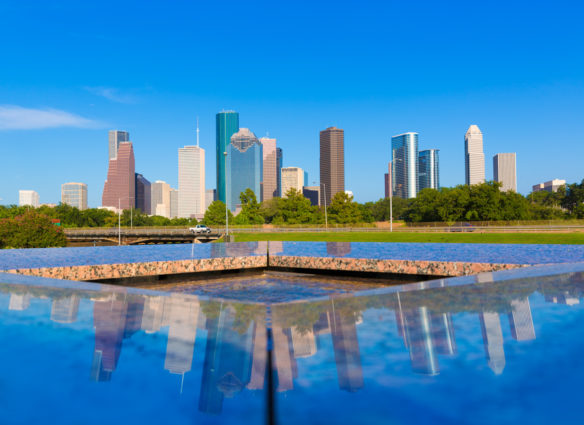 Are you planning a move to Houston this summer? If so, one thing will become apparent very quickly – it’s humid!

Our professional moving bovines can tell you that summer moves in the Houston area can be sweaty and sticky at all hours of the day. But why does the weather take such a humid turn?

Time for a quick geography/meteorology lesson.

First, let’s take a look at what humidity actually is. Humidity is the measure of atmospheric moisture (water vapor) in the air. Water vapor can’t be seen but it can be felt.

Relative humidity is a term that refers to the percentage of water vapor in the air compared to the maximum amount air can “hold” at a certain temperature. When the humidity surpasses 100% the air can’t hold any more water vapor dew will form.

Why Humidity Feels So Hot?

If there’s more water vapor in the air, why does it feel warmer rather than cooler when it’s humid? The reason high humidity makes you feel hot is because it reduces the effectiveness of sweating, the body’s natural cooling system.

When we sweat the moisture on our skin evaporates, creating a cooling effect as heat is transferred out of the body and into the air. When it’s humid out sweat evaporates much more slowly. At a relative humidity of 100% sweat evaporates at a snail pace and can make the body heat up.

Generally speaking, coastal cities tend to be more humid because nearby bodies of water put moisture into the air. When the temperature is high, like it always is during the summer in Houston, the water will evaporate causing humidity. Houston is not only very close to the Gulf of Mexico, it’s also right next door to two bays, Lake Houston isn’t far from downtown and the San Jacinto River feeds the massive lake.

Since Houston is also in region with a lot of low-lying land, anytime it rains the ground tends to stay damp for prolonged periods. It’s a situation that adds to the humidity even days after a shower. That’s why swampy areas tend to be humid all the time.

Another factor that adds to the humidity is Houston’s flood control reservoirs. Due to the low-lying land, floods often occur if there’s hard rain for a sustained period. The city has small and large flood reservoirs throughout the metro area that pool with water to prevent flooding, but it also means more moisture evaporates into the air creating humidity.

Step outside for a few minutes in August and you can instantly feel why professional movers in Houston are worth every sweat-drenched penny. At Square Cow Movers we know how to handle the humidity while we’re hauling. Give us a call or use the online form for an instant moving quote!