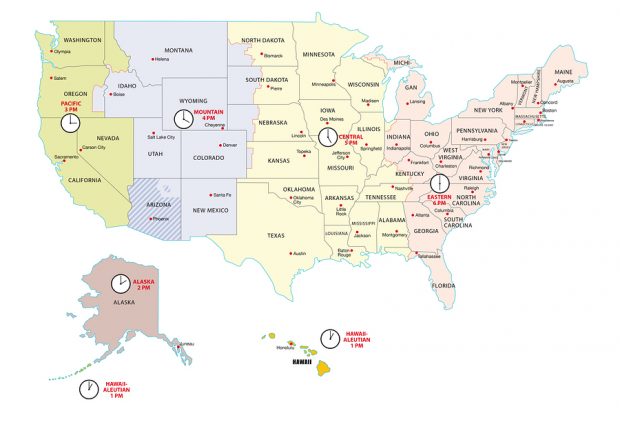 Making a move is hard enough as it is without adding a different time zone into the mix. Depending on the time of year, going from one coast to the next could really throw off your internal clock. With Spring Forward right around the corner the additional change could make adjusting to a new time zone even more difficult.

Going just one time zone over doesn’t usually require too much modification to your regular routine. However, if you’re moving to Denver from Charlotte or transferring from San Francisco to Nashville the weather is just one adjustment you’ll have to make. The tips below can help you get used living in your new time zone.

People have what’s known as circadian rhythms. Circadian rhythms are 24-hour cycles of certain physical and mental behaviors, which are largely influenced by light and darkness (sunrise, sunset and artificial lights). A number of bodily functions are affected by circadian rhythms including hormone production, sleep schedules and body temperature.

Your circadian rhythm will adjust to the new time zone, but it can take several days. You can speed up the process by controlling light sources as much as possible. For example, you could close all the window shades a few hours before the sun goes down if you’re moving from the east to the west.

Ease Yourself to Sleep in a Different Time Zone

The biggest problem of picking up and moving pastures to a new time zone is getting back on a normal sleep schedule. It’s particularly difficult on parents that have established sleep routines with their babies and kids.

A melatonin supplement can help you stick to your regular sleep schedule. Melatonin is a hormone that makes you feel tired and is meant to aid in sleep. The suprachiasmatic nucleus (SCN) in the brain controls melatonin production based on light perceived by the eyes. When there’s less light more melatonin is produced. If you’re moving to an earlier time zone a melatonin supplement can help you get to sleep earlier until your body gets used to the change.

You’ll also have to be careful with caffeine. Have you last cup of coffee and other caffeinated beverages at least six hours before you plan to go to bed. Alcohol should also be avoided while you’re acclimating to the new time zone since it too can disturb sleep.

Find Times to Talk With Family and Friends

One of the hardest parts about moving to a new time zone is being on a different hour than some friends and family. If you’re on the West Coast, Alaska or Hawaii and you’re trying to call a person on the east coast finding a time that works on both ends can get tricky. You may need to schedule talk time on a specific day and hour so it’s convenient all around.

Get on the Time Zone Before You Move

It’s hard for your internal clock to reset if you’re inside in a controlled environment all day. Getting outdoors in the natural setting will help ease your circadian rhythms to the new time zone. The best time to get outdoors is in the morning. This will help get your rhythms on track earlier in the 24-hour cycle.

If you’re moving across country to a new time zone Square Cow Movers can help make the transition a little easier. We have locations across the nation manned with some of the best long-distance movers in the business. Give us a call today to talk with a moving coordinator or use the online form to get an instant moving quote.