“Holy cow, Batman!” Those old Batman TV shows from long ago had some pretty inventive holy sayings. But is that where the term “holy cow” originated? Are men in tights, stopping crime in their free time responsible for popularizing one of the best known cow sayings of all time? 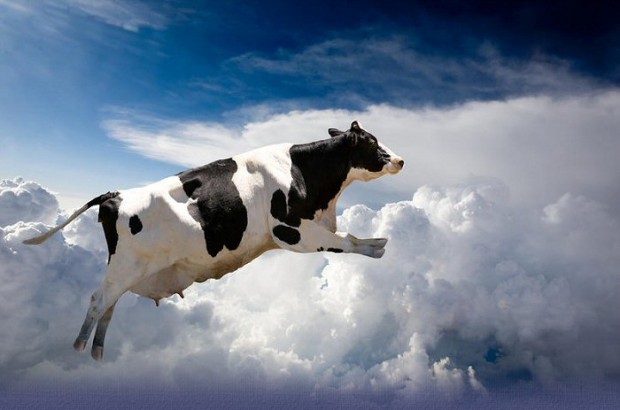 The Square Cow Movers team decided to investigate to see if we could find out where this popular cow saying came from.

The Meaning of Holy Cow

To figure out how this saying came about, we first looked at what the expression means and how it’s used. Nearly every time someone utters the words “holy cow” they are making an exclamation. Shouting “holy cow” lets others know you’ve seen something surprising or amazing.

Cows themselves are pretty amazing, so we see how the expression fits the bill.

So Where Did “Holy Cow” Originate?

Our research, turned up only speculations on where the saying came from. One definitive is that the exclamation “holy cow” is mainly used in native English speaking countries – the U.S., England, Canada and Australia. It’s a clue as to how “holy cow” came to be. Because of its prevalent use in baseball (see below) many believe the term is U.S.-born.

Did a Divine Bovine Inspire the Holy Cow Saying?

Many have speculated that the term “holy cow” is a play on the fact that in some religions, most notably Hinduism, the cow is a sacred animal. In some religious writings the term ‘holy cow’ is actually used. However, this is a literal use, not a humorous exclamation. While this may have inspired the saying it doesn’t seem to be the source.

The earliest recorded use of the saying “holy cow” comes from America’s favorite pastime – baseball. Way back in 1913 the Oakland Tribune noted that “Holy Cow” Peters was the umpire at a game. In Denver the following year, the Daily Lincoln News noted that fans of player Charley Mullen were changing up his favorite expression “holy cow” by instead saying “sacred Bessie”.

But it was the broadcasters of baseball that really popularized the term “holy cow”, starting with Hasley Hall in 1919. It went on to be the famous catchphrase and title of Harry Carey’s autobiography. Harry Carey is quite possibly the best-known baseball broadcaster in the history of the sport, spending an amazing 52 seasons behind the mic. He said that he began exclaiming “holy cow” during broadcasts to keep himself from using profanities.

So, next time you’re at a game and see something spectacular, channel your inner Harry Carey with a “holy cow” or two.