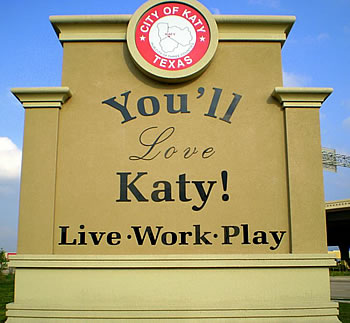 Katy, Texas may not have as much history as some Texas towns like Nacogdoches or Galveston, but this town can trace its roots back to the nineteenth century.

There is some speculation where the city of Katy got it’s name.  One story attributes the origin of the name of the town as an honorific for the saloonkeeper’s wife. While another telling draws a connection between the name of the town and the Missouri-Kansas-Texas Railroad. The reporting mark or alphabetic code that signified Missouri-Kansas-Texas equipment was written as “MKT”.  Supposedly the MKT was often referred to as “the K-T” which then evolved into “the Katy”.  The Missouri-Kansas-Texas Railroad had built through the area which is now Katy by 1893, but there wasn’t a Katy railroad agent until 1895 and the depot was not finished until 1898.

The Missouri-Kansas-Texas railroad and the first railroad agent in Katy, J.E. Cavaniss, were not the first railroad or agent in the area. Prior to 1890, a  mile south of the platted town site, the Texas Western Railroad depot was operated by the Hennesey family. Other early area inhabitants include Peter Black, the Pitts family, Waller County surveyor M.A. Beckendorff, and the families of former slaves Milto McGinnis and Tom Robinson.

The historic Missouri-Kansas-Texas depot still stands and today serves as a center for tourist and visitor information.  The Katy Heritage Society Railroad Museum is housed inside the depot and exhibits original elements that demonstrate how the depot operated as a passenger rail service.  The Missouri-Kansas-Texas depot and rail service were active until 1957.  In 1977 the depot was sold to the city of Katy.

Other early area structures include a Methodist church built in 1904 and one-room schoolhouses circling the area in Schilpf, Sills, Stockdick, Dischner and South Mayde.  The earliest parishes were the Baptist and Methodist congregations formed in 1898.

Some of the first businesses in Katy were grocery stores, a saloon, a meat market, a rice and peanut warehouse, lumberyards, hotels, livery stables, and a bank formed between the 1890s and early 1900s.  Town infrastructure like a post office opened in 1896 and the first telephone lines and a water system were also added during the same time period.  A growing agricultural industry supported these businesses and early citizens of Katy, Texas.  In 1901 William Eule brought rice farming to the dry-land farmers.  Rice farming was successful enough to replace cotton, peanuts and corn.  By 1904 Katy had a reported population of 119.

The industry that would really put Katy on the map was oil.  The first successful oil well in Katy was drilled in 1934.  A Humble Plant, which extracted liquid hydrocarbons from gas, was put into operation in 1943.  Later in the 1970s the Humble Oil Company would become a part of the Exxon Company.  During World War II this plant reached a peak production of 13,000 barrels of oil a day in 1945.  The war was a turning point for Katy, the proximity of Houston-area refineries made Katy the most important gas-condensate field in the United States.  The population of Katy boomed after WWII and continued to grow steadily.  The city of Katy now has about 15,000 residents.