As a human, all of us at Square Cow Movers are sure you have been well-educated in the history of the world as it pertains to homo sapiens, but have you ever considered history from a cow’s perspective? 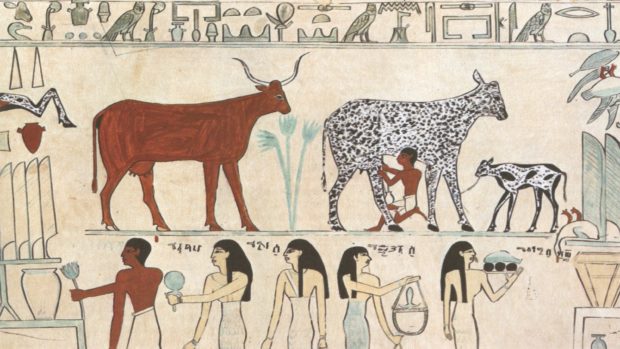 In order to become a more well-rounded person, we recommend broadening your historical context.   Expand your historical horizons by examining history from a heifer’s point of view.  In this blog we will focus on the early history of cows to give you a strong foundation in the udderly entertaining past of cattle.

The Origin of Cows

Geneticists from the University of Mainz in Germany, the National Museum of Natural History in France and the UCL in the UK studied the bones and remains of domestic cattle from an archeological site in Iran.  They discovered that modern cattle are the descendants from a single herd of wild ox from over 10,500 years ago.

Domestic cows weren’t extremely common, because it would require a sedentary society instead of a mobile one to raise the cattle in one place.  The first two types of domestic cattle are the humped zebu and the humpless European Highland cattle.

Cattle were first domesticated to serve as a food source, but around 4000 BC, Neolithic British and Northern European farmers began milking cattle.

Around 3000 BC Ancient Sumerians made cow’s milk into cheese and butter.  Ancient artwork still exists depicting scenes from daily life, like milking and straining.

Cows as a Religious Symbol

In Ancient Egypt cows were deified and worshiped!  There was even a cow goddess, Hathor, who personified the principles of motherhood, feminine love and joy.  This goddess guarded the fertility of the land and helped women during childbirth.  Hathor was commonly depicted with head horns with a sun disk in between.

Ancient Hebrews also referred to cow products in a reverential way.  The Old Testament contains several references to the “land of milk and honey”.   This was a positive phrase because it meant fertility, and being provided necessary nourishment as well as extra comforts.  In total the Bible contains over 50 references to milk and milk products.

Cows in the Americas

The first cattle arrived in the Americas in 1525 at Vera Cruz, Mexico.  The cattle were brought by Spaniards to the New World.

The first cows to arrive in what is now the United States came in 1624 at Plymouth Colony.

We know that humans revere their founding fathers, but after reading more about the illustrious history of cows, perhaps you will look on cows a little more favorably.  Can you believe that humans from several different cultures, regions and religions respected cows for their ability to produce life-giving milk?  We don’t need deities built in our honor, but a little respect would go a long way.