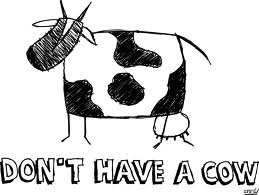 Come on, you know you’ve heard it before. If you or someone around you has ever needed to chill out, there’s a good chance that the reply “don’t have a cow” was used. But where did the “now common…” idiom come from?

Don’t have a cow – Square Cow Movers is about to tell you.

How the Term Don’t Have a Cow Originated

The phrase “don’t have a cow” has been around for decades, as far back as the 1950s. While the exact origin isn’t clear, it appears that there was a British saying along the same line, however it referenced “having kittens” rather than a cow. This cow catchphrase is certainly a descriptive one that doesn’t conjure up the best imagery.

In general the term means ‘don’t flip out’ or ‘calm down’. It’s usually reserved for someone who is overreacting to a situation that isn’t serious. It definitely isn’t the most sensitive way to address an upset individual, but that’s probably why a lot of teens use it when talking to one another.

Famous Uses of “Don’t Have a Cow”

Though it had already been a catchphrase for years, it wasn’t until the 1980s when the term began to pop up frequently in TV shows and movies. One of the earliest known uses was on the 1982 The Facts of Life episode “Mind Your Own Business”.

Of course, the most recognizable use of the term “don’t have a cow” comes from The Simpsons character Bart Simpson. Thanks to this little yellow guy, and all the merchandise of him, the term was highly popularized in the early 1990s. However, the term was used in cartoons before Bart Simpson came along. . . Shaggy Rogers from the hit cartoon Scooby Doo also used the phrase quite often among his other zany comments.

Today, the kooky website Cheezburger.com is reviving the popular term with a humorous series of cow pics and cow-related stories that the web team adds captions to. It’s possibly the first time cows were the ones using the catchphrase.