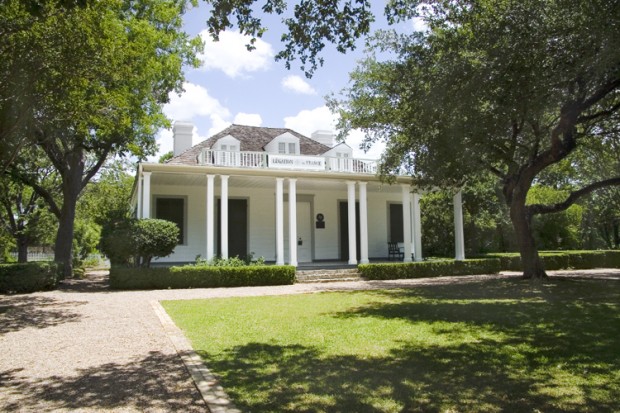 The next installment of our Square Cow Summer Camp Series focuses on a hidden gem of a Texas museum.  When people think about museums in Austin, the bigger museums come to mind: the Bob Bullock Texas State History Museum, Blanton Museum of Art and even the Children’s Museum.  Located on a little over 2 acres on the East side, the smaller French Legation Museum is often overlooked.

In case you aren’t familiar with the history of the French Legation Museum, here is a little refresher. After Texas became a republic in 1836, the monarch of France, King Louis Philippe, sent Alphonse Dubois to serve as a chargé d’affaires to the Republic of Texas.  The French Legation Museum was originally built in 1841 to serve as a home for Dubois.  In that same year, Sam Houston was reelected as President of the Republic, he then moved the capital from Austin to Houston.  Ownership of the house changed hands several times before Dr. Joseph Robertson purchased the property in 1848.

Ultimately, the French Legation Museum would serve as the family home to Dr. Robertson, his wife, Lydia Lee, and their 11 children for almost 100 years.  One daughter, Lillie Robertson, an early member of the Daughters of the Republic of Texas, lived in the house her entire life.  In her later years she opened the home for tours, it was her wish that the home continue to serve as an Austin landmark, a symbol of Texas history and a cultural site of learning.  In 1940 the last Robertson sister, Sara, passed away.  The Robertson family sold the property to the State of Texas in 1949 and the Daughters of the Republic of Texas became custodians of the French Legation Museum.

During the 1950s the Daughters took on the preservation of the home and restoration of the landscape and gardens.  The museum opened to the public in 1956.  Currently Daughters of the Republic of Texas Members and French Legation Museum staff are working to engage with the community in a new way and expand the focus of the French Legation Museum to include more community involvement and a broader audience.

This year, Museum staff members created a summer camp for kids that focuses not only on history, but science and creativity.  The French Legation Museum’s History Lab Summer Camp will encourage kids to explore the themes of early Texas history, invention, science, technology, history and creativity by investigating inventions made in the 1840s.  When creating exhibits and programming, museum staff members focus on the 1840s because it is a unique time period in Texas history (when Texas was a Republic) and because the time period is relevant to the French Legation Museum (when the structure was built).  Through hands-on activities at this history-based camp, kids will learn about 1840s inventions and the Republic of Texas era.  Activities will include: creating a pin hole camera, making home-made ice cream and  even silly putty.  Find out how all of these things are connected by sending your youngest herd members to the History Lab!  For more information: http://frenchlegationmuseum.org/category/events/