Coming February 1st, Austin will host one of its craziest parties of the year: Carnaval Brasileiro. 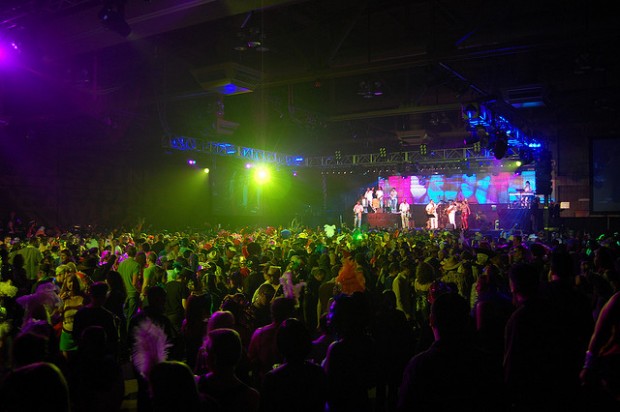 Outside of Brazil, Austin’s Carnaval is one of the biggest Brazilian Carnaval celebrations in the world. Back in 1975, a group of Brazilian transfer students were bummed that they were missing their nation’s biggest party of the year. Rather than miss out, they gathered together all their Austin friends (all they had to say was “party”) and had a bash of about two hundred at the Unitarian Church.

In 1979 Carnaval in Austin was busting at the seams, having sold out at the 1,800-capacity Armadillo World Headquarters. It then happened every year at the Palmer Auditorium until 2003 when it landed at the Palmer Events Center, where you will find the upcoming party as well.

Brazilian-based bands like Os Imperialistas do Samba (later Unidos de Austin), Susanna Sharpe and the Samba Police, Portela and Beleza Brasil have all featured as the musical talent for Carnaval Brasileiro. Now Austin has it’s very own Acadêmicos da Ópera, aka The Austin Samba School, where about 100 drummers and dancers open the show every year for Beleza Brasil. The Austin Samba School is the largest, and considered one of the best, groups of its kind in the United States.

In a time when Austin is growing so fast (which we love), we also find it to be our responsibility to tell new members of our community about things that make Austin unique and quirky – traditions that have been around a long time and need to be mentioned.

Started by Brazilians and adopted by Austinites, this party is a night of crazy dancing, loud Brazilian drum music, libations, and more crazy dancing accompanied by more loud Brazilian drum music. Not only that, but it’s a fairly authentic taste of what Brazilians experience every year at their native Carnaval. If you are like us and appreciate such traditions from a distance, totally cool. However, if you have just moved to Austin and are wondering what the more adventurous Austin natives do, then you need to check out Carnaval Brasileiro.

If you go, take plenty of pictures and let us know what it was like!