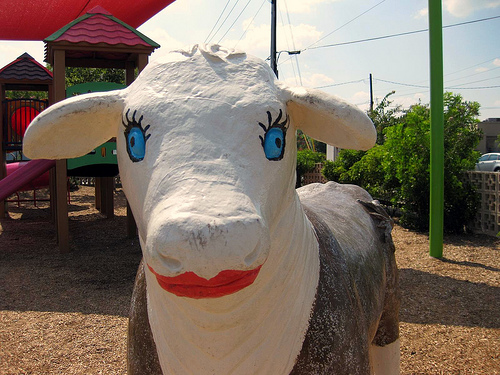 The Square Cow Movers mascot isn’t the only well-known cow in Austin. There’s Bevo the bull that always makes an appearance at the UT football games. There’s the ceramic cow art pieces located all around town. Then there are the cows of Amy’s Ice Cream.

When the weather warms up it’s not uncommon to see long lines waiting for a few scoops of Amy’s Ice Cream at the small South Congress shop. But that’s not out of the norm at any of the locations. To say that Amy’s Ice Cream is an Austin favorite is a serious understatement.

It all started about 30 years ago when Amy Simmons moved to Austin and wrote what she knew was a bad check to secure her first location on Guadalupe. While she didn’t have the cash flow she did have a lot of ice cream making knowledge that she gained working in a place called Steve’s Ice Cream in Boston.

The ice cream was so good that just a year later Amy’s was opening it’s second location in the Arboretum. From there it’s been a trajectory of one store opening after the next.

It’s not just the ice cream itself that makes Amy’s Ice Cream stand out among the many cold confection options around town.

Like the city it was introduced in, Amy’s Ice Cream has a cool feel about it from the time you walk in the door. It’s fun, it’s colorful, it’s everything an ice cream shop should be.

The cartoon cows of Amy’s Ice Cream are immediately recognizable to Austinites, and they follow right along with the fun feel of everything else Amy’s does. We definitely like the cows way better than the original logo, which featured an ice cream cone with a bite taken out of it in totally awesome 80’s style. The cows got started in 1988 when painter John Henry Green started plastering them around the various locations. When the 6th Street location opened in 1989 the neon cows out front solidified their significance for the ice cream shop.

What to Try at Amy’s Ice Cream 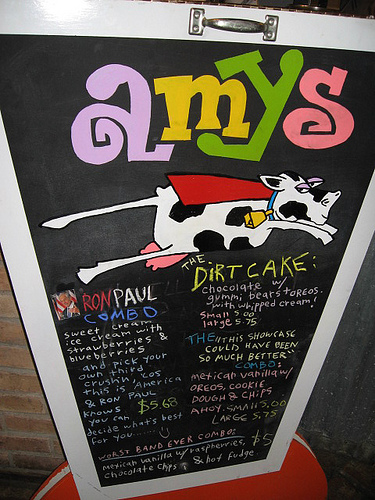 Try whatever is on the New or Rotating list because it may not be around for very long. With dozens of flavors to choose from (different flavors are available at different locations) it can be hard to narrow the selection down if you prefer to go with something on the regular menu. Sweet Cream is always a good choice as is Chocolate Chip Cookie. Do be aware that some of the flavors are made with alcohol.

Don’t forget the crushins’. Just watching the employees work them into the ice cream is worth the extra price. You may even be able to get the crushins’ for free at some locations by correctly answering trivia questions.

If you’re a yogurt fan you can’t go wrong with the Mexican Vanilla topped with your favorite crushins.

In 1991, the Wall Street Journal did a piece about Amy’s Ice Cream employee Rick Redmann and his antics of getting patrons to dance.

In 2003 People Magazine listed Amy’s Ice Cream as one of the top five ice creams in the country.

A few years ago Amy herself, along with her husband and one of their talented ice cream making aficionados were invited to The View for a segment on the nation’s best ice cream.