This post we’re having a little fun by taking a look at some cows that are getting attention in the digital world. We’re talking about the cows of Minecraft. Even if you aren’t an avid gamer or cow enthusiast like we are, Minecraft will still suck you into the fun of its blocky world. 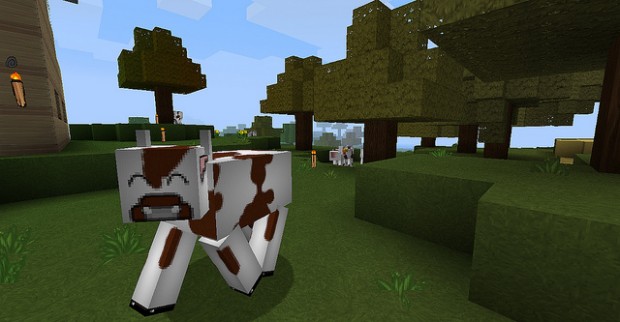 In a time when video games are moving towards more realistic characters and backgrounds Minecraft is taking a step back with a game that looks more Mario Bros. than World of Warcraft. However, the elements of the boxy figures do have crisp, clean details that weren’t possible in the 1980s.

But the look of the game plays right into the purpose of playing. The objective is to break blocks and place blocks to build things. What kind of things? Anything you can imagine or want to replicate from the real world. Everything in the game is made of blocks – everything except one thing. Users can also create music within the game to pair with what they build.

Players can also explore the Minecraft world on their own or together with friend in a multiplayer mode. This part of the game isn’t just about building it’s about survival and seeing what’s been built. Instead of leisurely building whatever you want you’ll need to build things that help you evade enemies.

Minecraft was created by Markus Persson who started the game and Jens Bergensten who brought the game to fruition. The game was introduced in 2010 and was so popular from the get-go that the server crashed not long after it was released. From there the momentum hasn’t slowed. You can now play Minecraft on your computer, gaming consoles and even your phone or tablet.

The latest update for PS3 and Xbox 360 will feature a number of notable changes and additions, including:

If you’d like to try the game out but aren’t a regular video game player don’t worry. The game is very accessible and there are in-game tutorials to help you as you go along.

One unique element to Minecraft is its breeding feature. All domestic animals, like cows, can be fed. When they’re fed they’re able to breed. When they breed they make more animals. Maybe that’s why there are herds of them all over the Overworld. Luckily, they are docile creatures that won’t attack.

In Minecraft cows are also resources just like they are in the real world. They provide milk, beef and leather. Players can farm the cows to utilize these resources in the game, but you’ll have to fence them in so they don’t run wild.

These square headed cows are super cute with a traditional white and black spots all over their body. It may just be us, but the Minecraft cows bare a striking resemblance to the Square Cow Movers mascot!