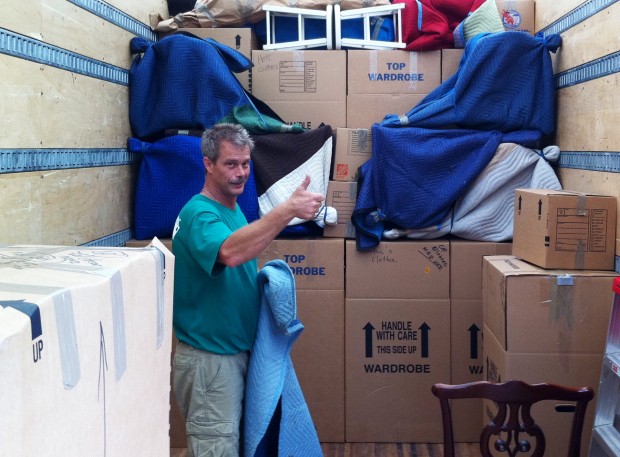 Recently Square Cow Movers lost someone that was very close to the team. Jeff Cole joined Square Cow Movers towards the end of the first year the company was in business. He spent many years in the moving industry before joining the Square Cow Movers team.  For this reason, Jeff played an integral role in teaching and training the young calves about the art of moving. Even after Jeff and Square Cow split ways, deep affection and a lasting friendship endured. We’d like to commemorate our friend by sharing a little bit about his life and what he meant to our team.

Even Experienced Movers Have a Tough Time with the Texas Heat

Jeff’s first day on the job wasn’t an easy one. He had recently made a move from Missouri to Austin and had been referred to Square Cow Movers since he had a lot (20+ years) of experience in the moving industry. However, Jeff had never moved in intense heat. We’re talking Central Texas heat in the middle of summer.

Wade and the guys threw Jeff into a job, and he worked tirelessly (probably trying to make a good first impression). Everything was going great, that is until Jeff over-heated. He started cramping up, and despite his best efforts he couldn’t finish the job. Jeff called Wade the next day to apologize and ask if he still had a job. Wade knew right away he had found someone that would be a valuable asset to the team and from there on out they never looked back. Eventually Jeff got more accustomed to the heat, always put salt in his Gatorade, and he worked nearly every day from then on for several years.  Jeff’s first day on the job is one of those stories that is often recounted to this day.

An Experience Bovine Among Newborns

Upon first glance Jeff may not have seemed like an obvious choice for a mover. He was a well-educated engineer and in his late 40’s when he came knocking on Square Cow’s door. But Jeff had also been moving furniture for over 20 years. To a young company like Square Cow Movers that kind of experience was invaluable, and Jeff was always more than willing to share his knowledge.

Jeff taught Derek and Wade more about moving furniture than anyone else… no one else comes close in comparison. At 47 he was much older than most the other guys and immediately took on the role of teacher and trainer. Teaching was one of Jeff’s best gifts. He would take a guy who had never moved a stick of furniture, and within a few weeks that guy would fully understand the fundamentals. Jeff cared about their success and spent the time to help new people learn the ropes.

Jeff was a great example of everything that Square Cow Movers stands for. He worked hard from start to finish on every job, because his goal was always to make the client happy. He truly cared for each client. Jeff typically took on the most challenging jobs, making sure his crew was up to the task every step of the way.

But Jeff was much more than an excellent mover, he was a super nice guy with a very interesting past. He loved, loved, loved to talk about old stories. Jeff would often recount the guys that worked for Square Cow Movers early on and the crazy places they would go during a move. Jeff was such a great friend and teammate it’s no surprise that he stayed close with the Square Cow Movers team even after moving on.

The funeral services will be held at 11am on Thursday April 24th at Saint Thomas More Catholic Church where Jeff was a regular attendee.  Jeff was born on June 4, 1960 and passed away on April 18, 2014 after a yearlong battle with cancer. He will be fondly remembered by his family, friends and everyone at Square Cow Movers.