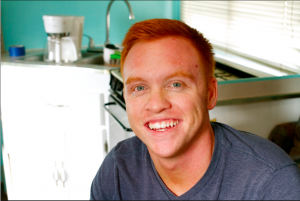 If you know anything about Square Cow Moovers, you know we are movers…  A few herd members are even moovers and shakers.  One former herd member in particular, Heath Padgett, definitely fits in this category.  He is doing some pretty cool things.

Recently, Boston.com featured Heath Padgett’s and his wife Alyssa’s adventure of working 50 jobs in 50 states. Instead of a traditional honeymoon, they set off on an adventure bucket list.  Their initial goal was to travel to all 50 states, but they needed to find a way to finance their trip.  After purchasing a refurbished RV, Padgett sent an email to a company that helps people find hourly employees, Snagajob, who became the sponsor of their journey.  They called their quest “Hourly America” and Padgett’s goal was to work an hourly wage job in every single state while his wife filmed it so they could make a documentary. Many of Padgett’s jobs were unpaid, so they made money through fundraising, freelance writing and used some of their savings.  Padgett and his wife are both aspiring writers, so documenting their journey through a blog only made sense.  They have been featured on CBS News and CNN.  In total, they traveled more than 20,000 miles over 13 months.  Some of the jobs Padgett had the opportunity to work included: martial arts instructor, fish fryer, dairy farmer, scooter mechanic, fudge maker, theme park zombie, stadium cleaning crew member and park ranger. But first, he was a member of our herd!

We are proud that he looks back fondly on his long days spent mooving while he was in college.  Padgett studied business and played baseball at nearby Concordia University.  Herd leader Wade Lombard remembers Padgett as a “super sharp guy” and “serial entrepreneur.”  We aren’t surprised that he is pursuing big dreams and making headlines.

Padgett also has some great wisdom to share garnered during his travels filming “Hourly America.”  He found that certainty and planning aren’t everything.  You may not be prepared for everything in life, “but if we were 100% sure everything was going to be fine, what’s the point?”

Here’s to adventure, taking chances, pursuing larger than life goals and whatever comes next for Heath and Alyssa.  Congratulations you two!