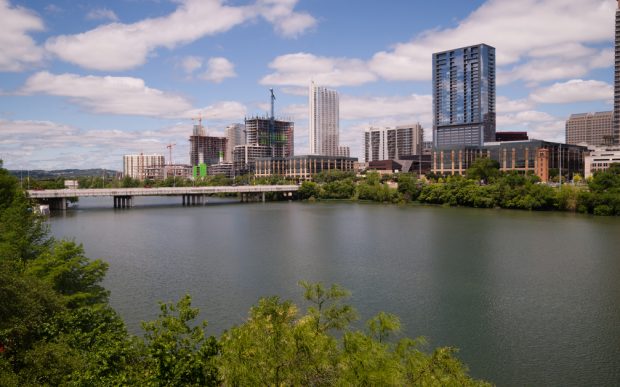 Summer is heating up – figuratively and literally! Thousands of people are on the move, but where are they moving to? And why? Our cows wrangled up some information on the cities that are adding to their population month after month. Here’s what we found!

After nearly a decade in the economic spotlight, Austin is still one of the most popular cities in the country for people on the move. The Census Bureau reports that 500,000 people moved to Texas last year. Many of new residents are coming from other states and relocating in Austin, the capital and tech hub of the Lone Star State.

Right up the road from Austin is one of the fastest growing small cities according to the latest Census Bureau report. Between 2014 and 2015 Georgetown, TX had a 7.8% population increase. Two of its main draws besides being next-door neighbors with Austin are the Victorian architecture and slow pace of life.

New Braunfels came in at number two for the list of the cities with the largest population increase. This isn’t too surprising to locals given its location between the growing cities of Austin and San Antonio as well as the beautiful hill country setting. It’s a charming small city with German roots and Wurstfest – one of the largest Oktoberfest celebrations in the country.

Baby boomers are one of the largest segments of the U.S. population. Their migration can have a significant impact on real estate markets. After Florida, Arizona is the state of choice for retirees, and right now Mesa is where they’re moving. SmartAsset.com took at close look at the Census Bureau numbers to determine that Mesa was the top city for relocating retirees. In 2014 there was a net migration of 2,565, which is 1,000 more than any other U.S. city.

Don’t let the oil downturn fool you. There are plenty of other industries in Houston that are attracting large numbers of people. Along with Austin, Dallas and San Antonio, Houston also significantly added to its population in 2015. Experts at Houston’s Center for Opportunity Urbanism note that housing affordability and good jobs are the main attractions for middle-class people.

Living in California’s state capital is a decision that’s largely based on housing costs. Instead of setting down stakes in San Francisco, one of the most expensive markets in the U.S., people are choosing to live in surrounding cities. Sacramento is one of the top spots, however Concord, CA has had the highest growth of any American city in the last few years based on moving statistics. This is strictly due to its proximity to Silicon Valley. The small central valley city of Manteca is also getting new residents because it’s just 76 miles from San Fran.

Not surprisingly San Francisco is on Realtor.com’s list of the top 10 cities that are losing the most residents.

Realtor.com used its own tools and Census Bureau statistics to crunch numbers and determine Tampa, FL was one of the hottest markets for movers. Living in a beach community is actually affordable in Tampa where the median home price is $230,000. The markets in Florida haven’t fully bounced back from the recession, but prices are beginning to creep upward.

It’s clear from the latest data that Texas is still the state that’s attracting the most people. Planning on making a move to Texas in the near future? Give Square Cow Movers a call. We are one of the fastest growing moving companies in Texas with locations in Austin, Katy, Dallas/Fort Worth, McKinney, The Woodlands and Houston.