Happy Thanksgiving, everyone! Boy, we sure do have a lot to be thankful for this year here at Square Cow Movers, in Texas and all across the country. Despite our setbacks and imperfections, we always seem to push through and persevere.

Throughout the history of our great country, there have been men and women that sacrificed everything to make sure all Americans made it through. Above all else, it’s our troops, past and present, that we’re most thankful for. Without their courage and commitment, our Thanksgiving celebrations may have ended long ago. 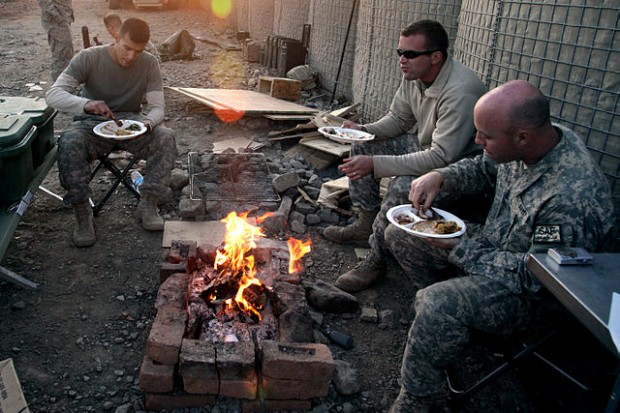 Though Thanksgiving wasn’t yet an official holiday when President Washington gave his Thanksgiving Proclamation, it was an annual event in the northern part of the country. General Washington, who himself fought in the War of Independence, several times noted what a blessing it was to have an opportunity for the American people to establish their own government – a government that would protect their safety and happiness.

Prior to the War of Independence, the colonies weren’t free to rule themselves. Distant European rulers made decisions that benefited their own people rather than those across the Atlantic. But men and women – everyday people – banded together and won freedom for the United States. For that, we are greatly thankful.

Protecting the Safety of Americans

The men and women who decide to serve in our country’s armed forces don’t ask for thanks, though they most certainly deserve it. At times it can be a very thankless job, one that consumes every mental, emotional and physical fiber. But still they serve.

When Japanese fighter planes flew over Pearl Harbor it opened a new chapter in American history that we hadn’t experienced since the War of Independence. We had been attacked on American soil. Innocent civilians were killed along with servicemen. Without hesitation, men and women from around the country came forward to protect us as we entered the fray of WWII. These brave individuals helped turn the tide of the war and defended our allies when they couldn’t do it alone.

Today, we face more threats than ever and more challenges in protecting the American way. But still the will of the U.S. persists thanks to the men and women charged with keeping our enemies at bay and forming alliances around the globe. We are forever thankful to the people that make it possible for us to spend this Thanksgiving with our loved ones, even as they serve abroad and are unable to celebrate with their own families and friends.

For that we dedicate this Thanksgiving to our troops and their families.