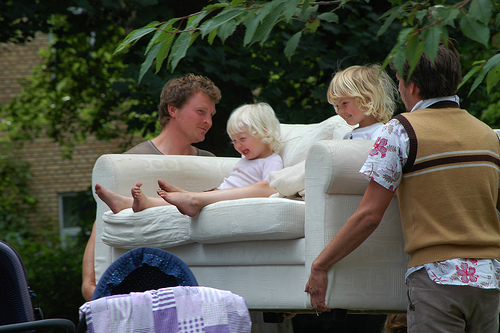 As a college student or young adult with few possessions, moving isn’t quite as difficult an endeavor.  Generally, as you get older you tend to acquire more stuff, thus the two are not mutually exclusive but strongly related.  Adults in the midst of a move may miss the days when payment for a move simply meant pizza and beer.  However, if you are hiring professional movers, you probably aren’t simply moving down the dorm hall with only a futon and a few books.

Aging out of asking friends for moving help has a few perks, the biggest of which is that you are no longer at the other end of that heavy couch or mattress.  Now you get to supervise the entire move, without lifting anything heavy!  Asking friends to help you move, is like asking someone to drive you to the airport, nobody really wants to do it, but someday they may need the same favor.

While you may be too “old” or have too much stuff to ask friends for moving help, you can always ask for help packing/organizing.  Now instead of asking your friends to come over and help you lift heavy things in exchange for pizza and beer, you can sophisticatedly request, “Hey wanna come over and help me pack, we can order Chinese take-out and drink some wine?”