If you close your eyes and visualize a cow, does the image of a cow in a grassy field chewing on some grass come to mind? While cows do eat grass, cows also eat corn.  Most cows begin their lives by eating grass, but corn-based products also supplement their diet.  Corn helps cows to grow more quickly.

There is some debate about whether grain-fed or grass-fed cows are healthier. A recent study by a Texas A&M AgriLife Research Professor and the Norman Bourlag Institute of Animal Agriculture showed that corn fed cows in Japan and Korea were healthier than grass fed cows in Australia.  However, if both corn and grass are placed in a pen with a cow, a cow will always choose to consume the corn. 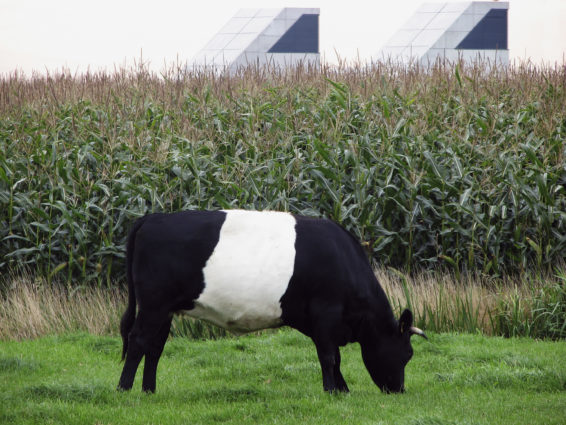 A few decades ago farmers began feeding cows corn; however, a primarily corn-based diet for cattle was not considered until there was a surplus.  During World War II, farmers produced a massive surplus of grain, which the population was not able to consume.  The farmers fed the surplus of grain (which was mainly corn) to cattle.  They then discovered that a grain-based diet allowed the cows to grow faster.  And we are glad they did!  Eating grass for all eight meals every day gets old fast.

To celebrate Square Cow Movers love of corn, we want to promote the fall season of The Woodlands Concerts in the Park series.  On six Sunday nights in both September and October, different musicians will give free performances at Northshore Park. The musical genres that will be represented include: country, R&B, Jazz, Pop, Rock and Texas Funk.

This Sunday, September 15, Hope Cassidy will perform and the special theme is “Go Crazy with Corn!”.  There will be corn-based food and games.  Your family can enjoy popcorn, candy corn and cobs of corn.  This is beginning to sound like a corny cow heaven.  The calves or kids can make “corn” art and participate in special popcorn games (if we don’t eat all the corn first).  These concerts occur from 5:30 to 7:30PM.  All of the concerts are free and open to the public.

The Gary Michael Dahl band will perform the following Sunday, September 22. The special free event is the 3rd Annual Family Sidewalk Chalk Competition.  Entire families from The Woodlands can compete against each other while listening to great music.  Each competing team will get to use a block of concrete as their canvas.  Chalk and supplies will be provided by the Township, which is presenting all six of the concerts.  Chalking can begin at 5PM, while music starts at 5:30PM.

October will be full of even more fun and music!  Will Makar, the Fondue Monks and Quiet Company will perform on Sunday evenings in October.  The free fun events include: the 1st Annual Make Your Own Scarecrow Competition, a pumpkin search, The Great Pumpkin Puzzle and a Jack-O-Lantern challenge.