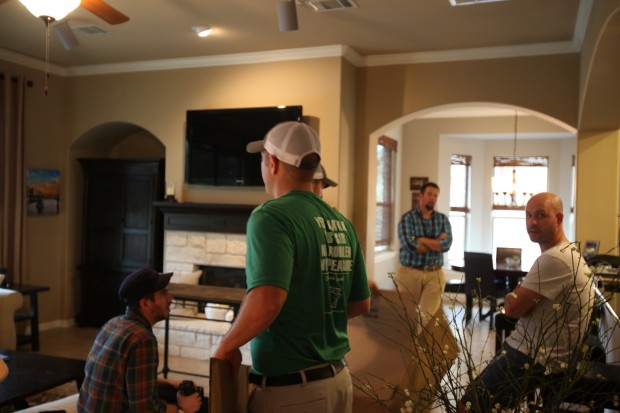 In case you haven’t heard Square Cow Movers will be coming out with some new promotional videos soon!  We sat down with the Digital Marketing Director of Square Cow Movers, Nick Alter, for a behind-the-scenes interview and look at the making of the videos.

When will the new videos be released?

NA: The videos will come out sometime in November.

How long did it take to film the videos?

NA: We squeezed everything in to  2 jam-packed days.

How many locations did ya’ll film at?

NA: We filmed in both North and South Austin. I would say there were about 10 different locations.

How many people worked on this project?

NA: The entire herd working on this project included about 50 people.

Did ya’ll film an actual moove?

NA: No, we used a house in Steiner Ranch as a backdrop for a mock moove.

Who did the filming?

NA: We brought in a professional camera crew: 3 camera guys and 1 audio guy. 2 camera guys would be filming,  while1 would take still shots and the other worked the audio.

NA: There was a script, but the videos also have a lot of improvisation and voice over work as well.  The guys would practice the script about 5 to 10 times, but the wording didn’t need to be exact.  It was a little more natural to have them act out some of the scripted scenes in their own words while still conveying the main message that was written in the script. All of these elements worked together to tell the story of Square Cow Movers.

Who are the characters in the videos?

NA: Well, obviously most people are acting as themselves like all the owners and their families.  Two of the head moovers did the mock mooving in the videos.  Oh, and we also had a guy dressed up in a cow suit, just another herd member.

What was the most difficult part of the process?

NA: Getting Wayne and Derek to be comfortable on camera.

What were some of the most stressful moments of the filming process?

NA: The wind made it difficult to record audio as well as we needed and there were a few noisy neighborhood distractions like a plane flying overhead or a lawn mower running in the background.  We were also on a tight schedule, we tried to film as quickly as possible before losing daylight.  Another stressful moment was when we were trying to get a close-up shot of the truck on the 360 Bridge, we had a hard time getting as close as we would like while still being safe.

What was the funniest thing that happened?

NA:  When we were shooting the guy in the cow costume would jump out of the truck as if he had just driven it, nonchalantly check the mail, or sweep while the main action was happening in the foreground.  Everyone just acted as if the guy in the cow costume was just a part of the team and everything was normal.  I thought that was hilarious and it was one of my favorite parts.

What was it like working with the whole herd?  All the family members and kids?

NA: Crazy, fun bedlam.  All together there are 12 kids/grandkids in the Lombard and Mills families.  Trying to get everyone to do the right thing at the right time was chaos. But it was fascinating to see whole family dynamic.  When everyone was together you could really see their story. You could better understand why Wayne, Derek and Wade wanted to start this company, because they wanted their family to be together.  It’s amazing to see that their vision has come true and the entire family has accomplished this goal.  I want a family like that!

What message does Square Cow Moovers want to communicate through these videos?

NA: This is a story about their family and about Square Cow movers, why they exist, how they got there, and how they came together.