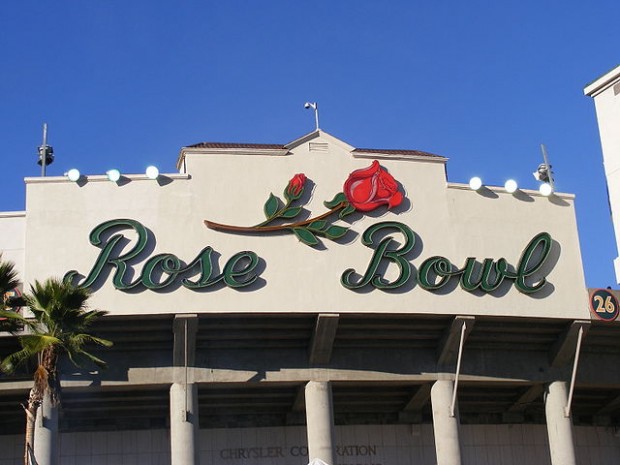 We are about to see history in the making. The 2014 Vizio BCS National Championship Game is happening January 6th, 2014. The Auburn Tigers face off against the Florida State Seminoles. It’s not being played in Austin, Texas of course. It will be in Pasadena, California at the iconic Rose Bowl Stadium.

We don’t normally write about football here at Square Cow Movers. First of all, the football is made out of cowhide (ew), and the game of football goes against our very nature as movers. Seriously, think about it. We wouldn’t be Austin’s number one moving company if our guys were actively slamming into each other while carrying precious cargo down the field, or lobbing it 30 yards for that matter.

Still, it’s football and this is Texas, so it’s kinda hard not to get into the spirit of the thing. Not only that, but this is the 16th year for the Rose Bowl. It’s also the last year that the top two teams will automatically play in the Bowl Championship Series before the league implements some kind of crazy four-team College Playoff System. (Apparently people were getting bored with the current system?) Whatever, just like there can be only one Highlander, than can be only one winner of the American Football Coaches Association’s “The Coaches’ Trophy”. We plan on watching the game as long as we can get all our moves done in time.

Actually, that’s something that we are very proud of with our team. Every so often we mention one of our most important company rules – “We aren’t done until all the cows come home.” Until all of our crews finish their moves for the day, we don’t leave the office. Even if the game is on, we won’t stop until every job we said we’d do that day is done. Sometimes this means we don’t go home until midnight or later, but it’s crucial to us that our boys feel confident that the Cow has their backs.

It’s just like a football team really. Did you ever see that movie with Sandra Bullock and Quinton Aaron, The Blind Side? Without your team to back you up, you can’t really accomplish anything. (We can think of a few football teams that could do with a reminder of that particular lesson.)

So, congrats to both teams in the Rose Bowl this year. Take care of your players. Play well and may the best team win.